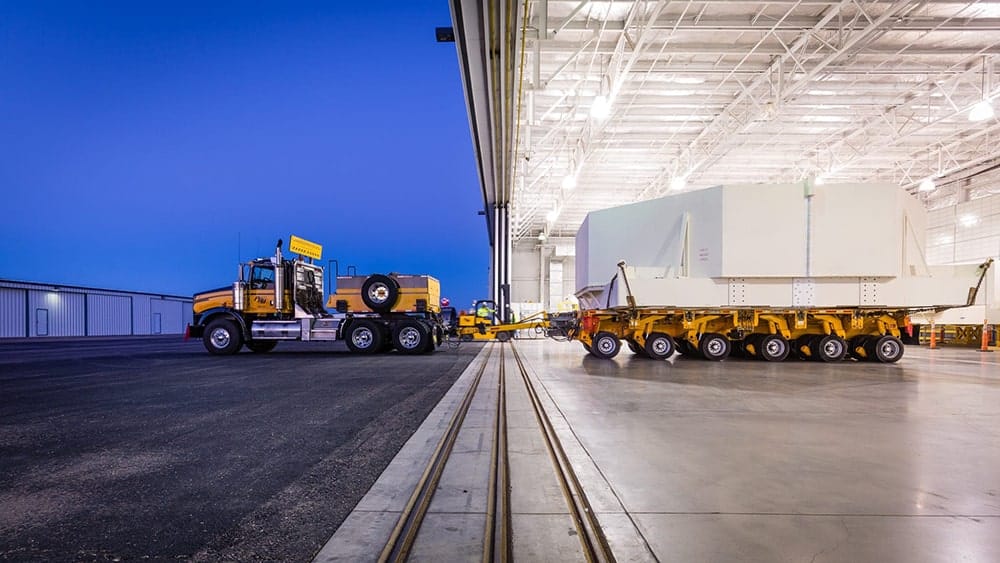 The first of seven 27-foot mirrors that together assemble into the world’s largest telescope, the Giant Magellan Telescope, has left the Richard F. Caris Mirror Lab at the University of Arizona, making space for the production of the remaining mirror segments.

At 2:00 a.m. on Sept. 20 the hangar-like doors of the Mirror Lab, located underneath the University’s football stadium, slid open to reveal a custom-made precision shipping container, with the mirror tucked inside, ready to be moved to a temporary storage facility on the outskirts of Tucson AZ, as the first step on its journey towards its ultimate destination in the Chilean Andes.

Once completed, the seven mirror segments will form the heart of the Giant Magellan Telescope, designed to have a resolving power 10 times greater than that of the Hubble Space Telescope.

The Mirror Lab currently houses Giant Magellan Telescope primary mirror segment numbers 2, 3, and 4 which are in various stages of fabrication. Segment 2 is undergoing its final stage of work – polishing of its reflective surface – while segment 3 is ready for front surface grinding, and segment 4 is ready for rear surface grinding. The 17-ton glass disc for the fifth Giant Magellan Telescope primary mirror segment will be cast at the Mirror Lab on November 5, 2017.

Safely ensconced in its transport container, the mirror was carefully loaded onto the deck of a 48-wheel transporter. The move by road was undertaken by Precision Heavy Haul Inc. of Phoenix AZ, taking an hour to cover the roughly 8 miles to the storage facility.

Construction is underway at the Giant Magellan Telescope site; work on essential infrastructure – roads, power, water, sanitation, communications, and a worker’s residence – is complete. Excavation of the foundations for the telescope and the laboratory where the mirrors will be matched to the telescope is scheduled to begin early next year.

The telescope is expected to see first light in 2023 with four of the Arizona mirrors. The seventh mirror should be in the telescope in 2025.

“Starting the first mirror on its long road to the mountain top in Chile marks a major milestone for the project. The Giant Magellan Telescope is a discovery machine and the precision optics form its uniquely powerful eye on the Universe. When Science, Engineering, and Philanthropy come together, great things are bound to happen.”

“The University of Arizona is proud to be a partner in the Giant Magellan Telescope. The Giant Magellan Telescope’s primary mirror design and fabrication processes, invented by UA scientists and engineers, are at the heart of the telescope. With the first completed segment moved from the Richard F. Caris Mirror Lab, we will have more space to continue the production of the remaining segments.”

Dr. Buell T. Jannuzi, Head of the Department of Astronomy and Director of Steward Observatory, University of Arizona