A rendered video shows a birds eye view of the completed Giant Magellan Telescope standing tall at its home, the Las Campanas peak in Chile’s Atacama desert, with the telescope pointed at the Milky Way in the night sky.

Chile: Our Window Into the Universe

Science at Its Best

The Atacama Desert in Chile is one of the best locations on Earth to explore the heavens. The desert is an astronomer’s paradise because of its high altitude, clear skies, dark nights, and steady atmosphere. These are some of the reasons why the Carnegie Institution for Science, one of the Giant Magellan Telescope’s founding partners, chose the Atacama Desert for their renowned Las Campanas Observatory (LCO). The location’s scientific value is supported by five decades of active telescope use.


The Giant Magellan Telescope’s location in the Southern Hemisphere provides astronomers with direct observation of many celestial objects of scientific interest, including the galactic center of the Milky Way, the nearest supermassive black hole (proximity to Sagittarius A*), the nearest star to our Sun (Proxima Centauri), the Magellanic Clouds, and many of the closest galaxies and exoplanets. This is also part of the reason why the southern sky is home to many of the world’s most advanced ground-based telescopes, like the Atacama Large Millimeter/submillimeter Array (ALMA), the world’s largest radio telescope studying light from the coldest and oldest objects in our universe. In addition, many of the most advanced space telescopes, like the James Webb Space Telescope (JWST), have key science mission directives in the southern sky.
The Giant Magellan Telescope will take advantage of LCO’s remote location, away from light pollution and the thin atmosphere of Las Campanas Peak, LCO’s highest point at 2,514 meters above sea level. On the peak, telescope seeing is among the best in the world. The median seeing is 0.63 arcseconds at 5000 Å, with the best quartile below 0.50 arcseconds. The desert’s low precipitable water vapor content improves the telescope’s sensitivity at infrared wavelengths, providing amazing optical and infrared observing conditions for more than 300 nights of the year. 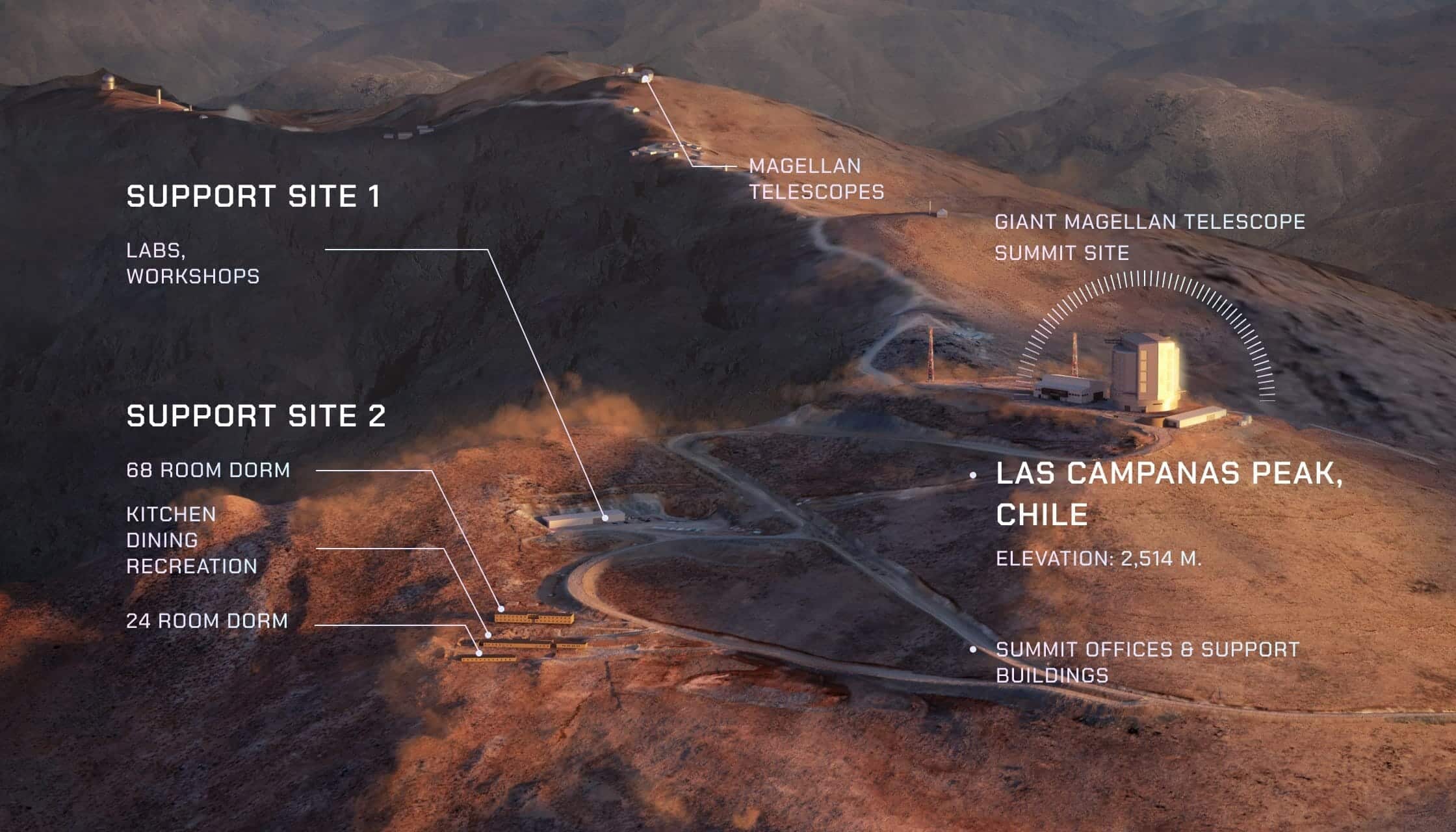 Moisture in the Air
Moisture in the air absorbs light and can form clouds, blocking the telescope’s view of the universe, so dry areas with no clouds are best for optical quality.

Light Pollution
City centers and large suburban areas create light pollution at night, so dark regions far away from sources of light pollution are best for viewing the faintest objects in the universe.

Wind
Wind buffets the telescope and can cause images to jitter, so areas with calm winds and telescopes with optimized wind damping designs are best for optical performance.

Extreme Temperature
Extreme temperature swings during the night can distort the shape of a telescope’s mirrors and decrease image quality, so areas with stable climates are best for optical quality. 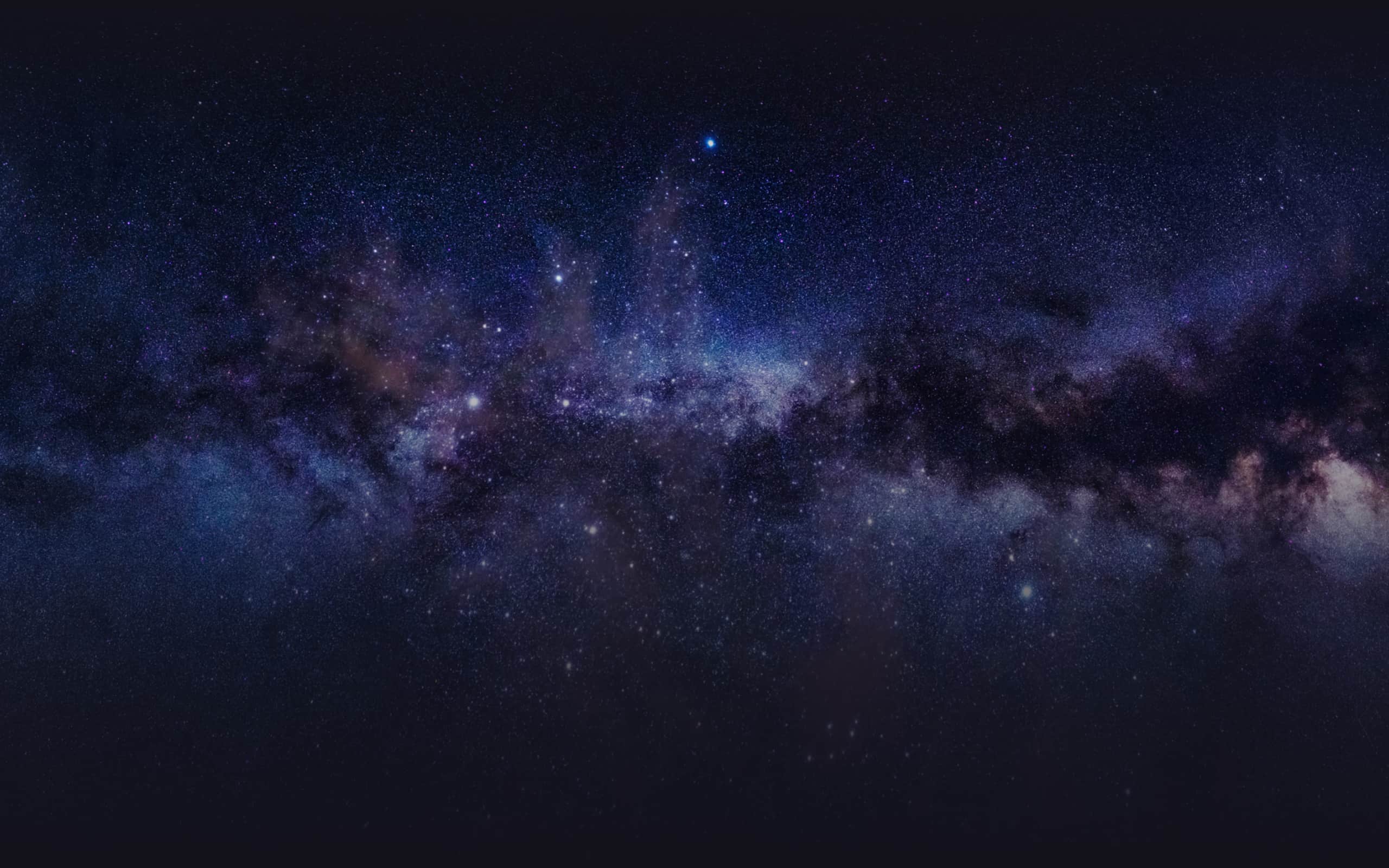 Chile Is an Astronomical Powerhouse

Chile is a special place. Since the mid-20th century, Chile has been the center of important astronomical discoveries. It will continue to be the world’s premier astronomy research center with the addition of the Giant Magellan Telescope. By 2030, Chile will host nearly 70% of the world's astronomical infrastructure.

As the astronomical capital of the world, Chile provides synergistic scientific collaborations between existing telescopes, international universities, and local communities. The international collaboration fosters the expertise required to build, operate, and maintain the most advanced telescopes ever engineered. Large scientific projects like the Giant Magellan Telescope rely on the strong international partnerships that the people of Chile have generously embraced. This Chilean relationship with astronomy has skyrocketed the prestige of local research universities and has contributed to an innovative economic boom.
The Giant Magellan Telescope will be able to coordinate scientific efforts with ground-based and space-based telescopes working at various wavelengths, making Chile the ideal location for synergistic astronomical observations and high-impact discoveries. 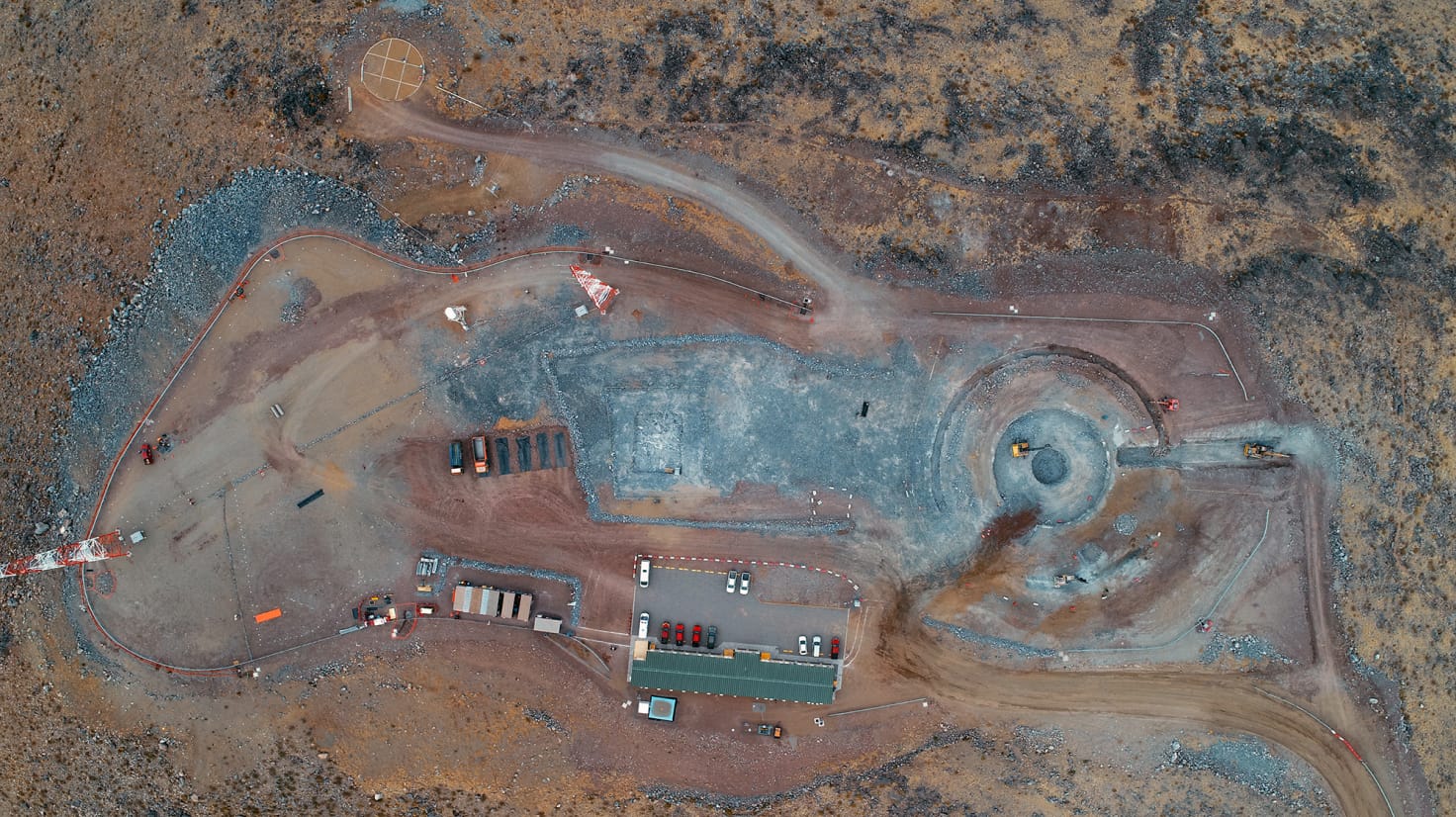 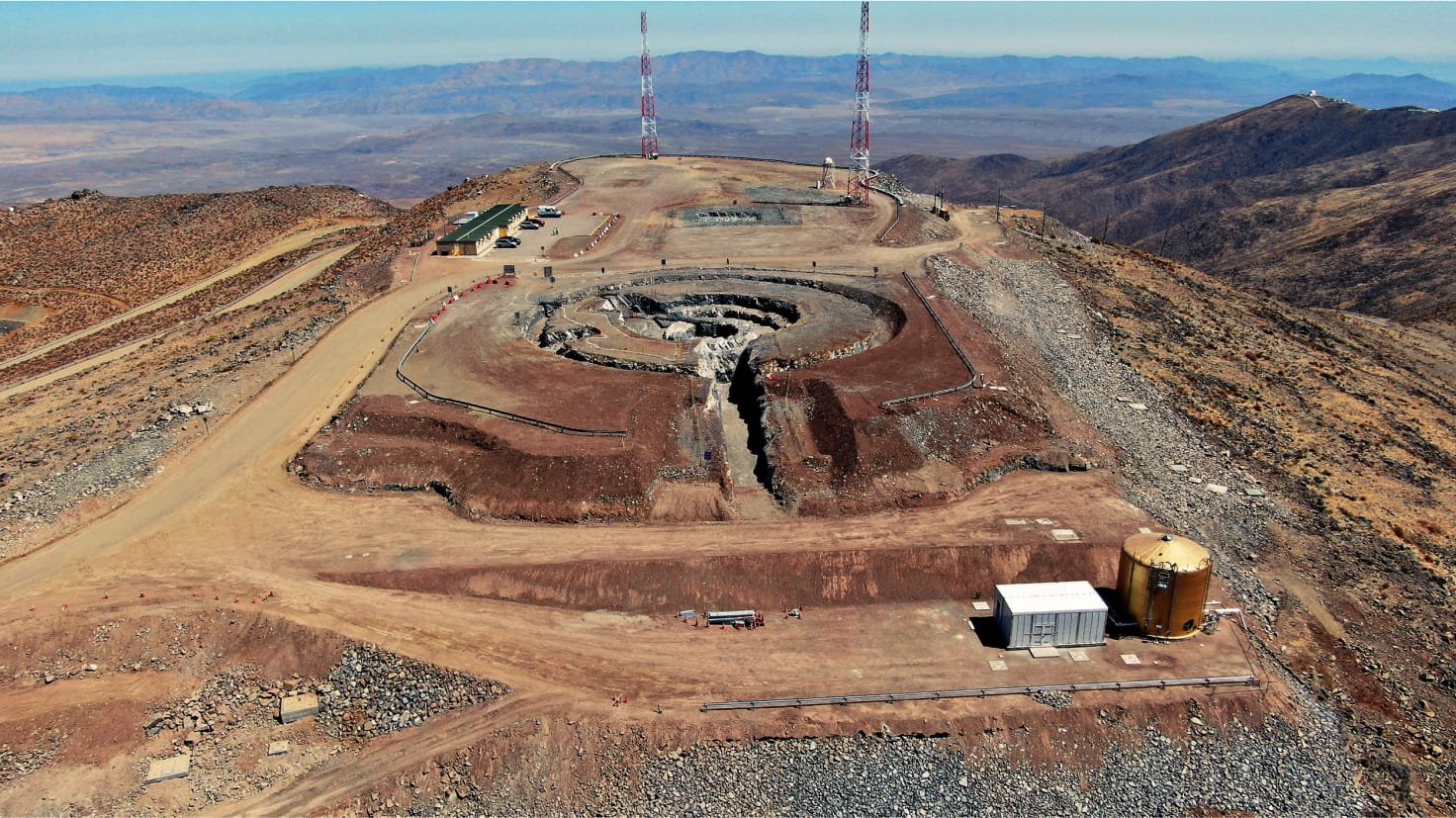 Aerial view of the telescope summit 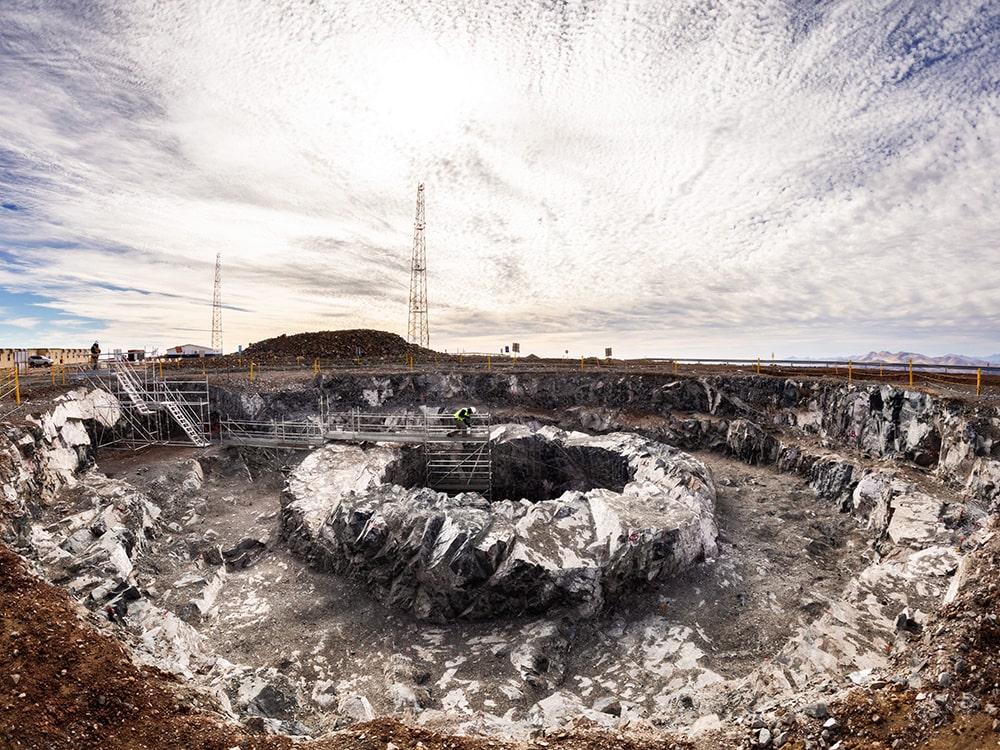 The Giant Magellan Telescope is taking a leading role among observatories in Chile in education, research access, and inclusive astronomy. Here are some of the exciting initiatives we continue to grow: