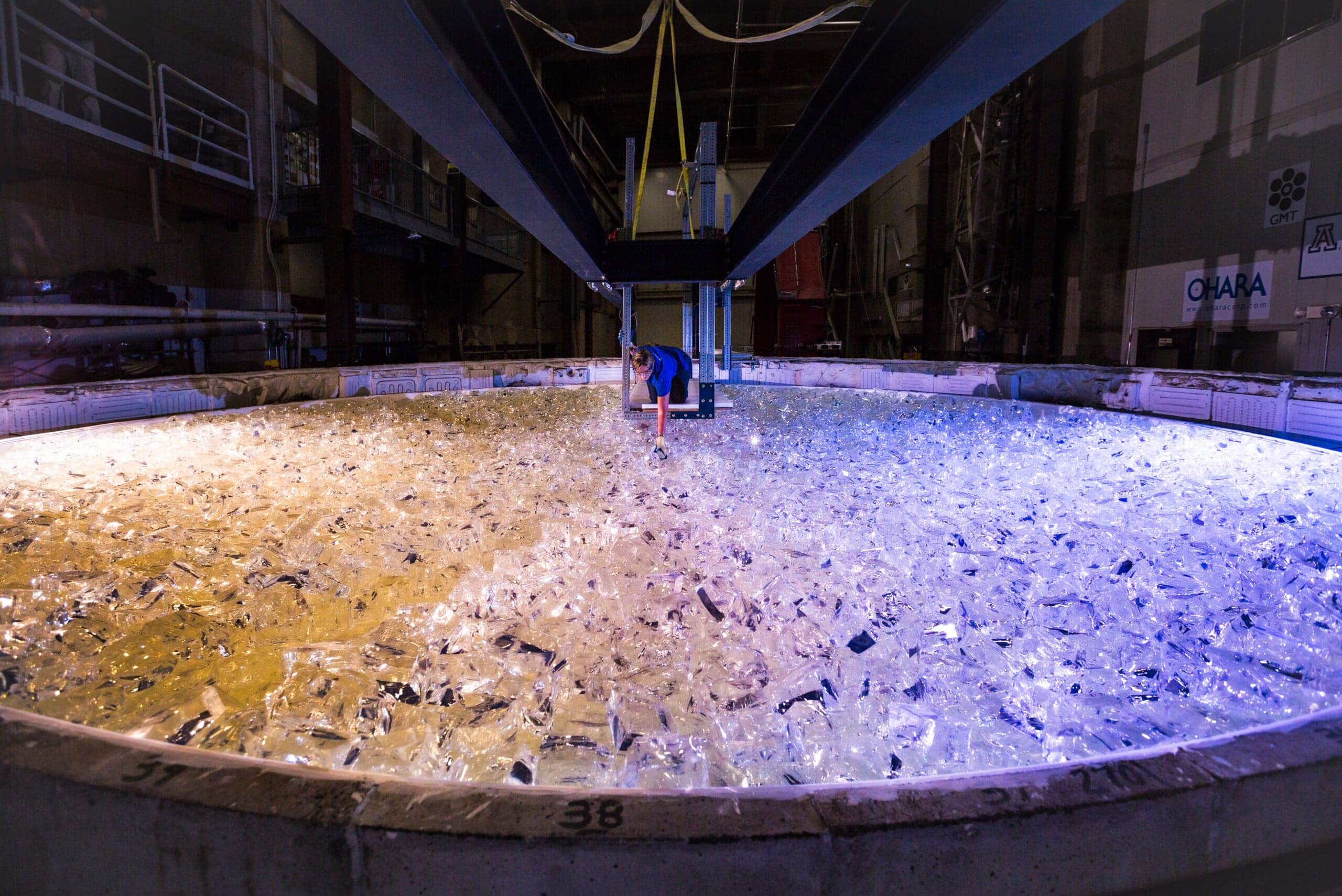 PASADENA, Calif.–The Giant Magellan Telescope Organization (GMTO) today announced that it has initiated the casting of the fifth of seven mirrors that will form the heart of the Giant Magellan Telescope. The mirror is being cast at the University of Arizona’s Richard F. Caris Mirror Laboratory, the facility known for creating the world’s largest mirrors for astronomy. The 25-meter diameter Giant Magellan Telescope will be sited in the Chilean Andes and will be used to study planets around other stars and to look back to the time when the first galaxies formed. The process of “casting” the giant mirror involves melting nearly 20 tons of glass in a spinning furnace. Once cooled, the glass disk will be polished to its final shape using state-of-the-art technology developed by the University of Arizona.

The GMT will combine the light from seven of these 8.4 meter mirrors to create a telescope with an effective aperture 25.4 meters in diameter (83 feet). With its unique design, the Giant Magellan Telescope will produce images that are 10 times sharper than those from the Hubble Space telescope in the infrared region of the spectrum.

Each of Giant Magellan Telescope’s light-weighted mirrors is a marvel of engineering. The mirrors begin as pristine blocks of custom manufactured low-expansion E6 glass from the Ohara Corporation of Japan. Precisely 17,481 kg of these glass blocks have been placed by hand into a custom-built furnace pre-loaded with a hexagonal mold. At the peak of the lengthy casting process, in which the giant furnace spins at up to five revolutions per minute, the glass is heated to 1165°C (2129°F) for about four hours until it liquefies and flows into the mold. The casting process continues as the glass is carefully cooled for three months while the furnace spins at a slower rate. The glass then undergoes an extended period of shaping and polishing. The result of this high-precision process is a mirror that is polished to an accuracy of one twentieth of a wavelength of light, or less than one thousandth of the width of a human hair.

“Casting the mirrors for the Giant Magellan Telescope is a huge undertaking, and we are very proud of the UA’s leading role creating this new resource for scientific discovery. The Giant Magellan Telescope partnership and Caris Mirror Lab are outstanding examples of how we can tackle complex challenges with innovative solutions,” said UA President Robert C. Robbins. “The University of Arizona has such an amazing tradition of excellence in space exploration, and I have been constantly impressed by the things our faculty, staff, and students in astronomy and space sciences can accomplish.”

With its casting this weekend, the fifth Giant Magellan Telescope mirror joins three additional Giant Magellan Telescope mirrors at various stages of production in the Mirror Lab. Polishing of mirror 2’s front surface is well underway; coarse grinding will begin on the front of the third mirror shortly and mirror number 4, the central mirror, will soon be ready for coarse grinding following mirror 3. The first GMT mirror was completed several years ago and was moved to a storage location in Tucson this September, awaiting the next stage of its journey to Chile. The glass for mirror 6 has been delivered to Tucson and mirror seven’s glass is on order from the Ohara factory in Japan.

In time, the giant mirrors will be transported to Giant Magellan Telescope’s future home in the Chilean Andes at the Carnegie Institution for Science’s Las Campanas Observatory. This site is known for being one of the best astronomical sites on the planet with its clear, dark skies and stable airflow producing exceptionally sharp images. GMTO has broken ground in Chile and has developed the infrastructure on the site needed to support construction activities.

“Creating the largest telescope in history is a monumental endeavor, and the Giant Magellan Telescope will be among the largest privately-funded scientific initiatives to date,” said Taft Armandroff, Professor of Astronomy and Director of the McDonald Observatory at The University of Texas at Austin, and Vice-Chair of the GMTO Corporation Board of Directors. “With this next milestone, and with the leadership, technical, financial and scientific prowess of the members of the GMTO partnership, we continue on the path to the completion of this great observatory.”