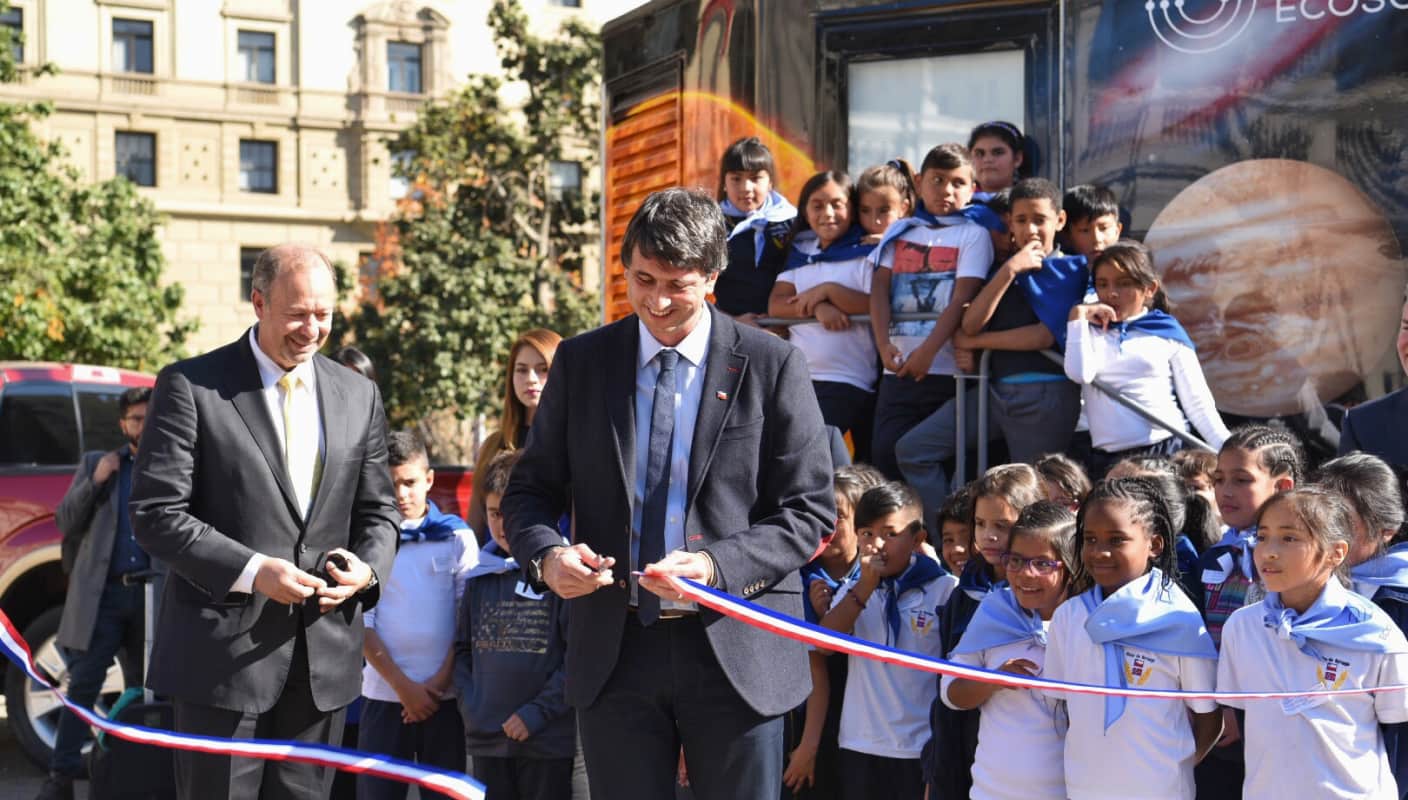 This unique laboratory includes a state-of-the-art inflatable planetarium and a portable telescope, together with an innovative and inclusive educational program based on the best practices of science education. The eclipses of 2019 and 2020 in Chile will be the hallmark of this laboratory that will reach the most remote and underserved places in the country.

The LabMóvil ConCiencia Astronomy (Mobile Astronomy Lab) and Inflatable Planetarium were launched by the EcoScience Foundation, the Giant Magellan Telescope (GMTO), and the Embassy of the United States in Chile on Monday, May 13th, with a public party in front of the Presidential Palace La Moneda in Santiago, Chile.

The mobile lab was inaugurated by the Minister of Science, Technology, Knowledge and Innovation, Andrés Couve, who highlighted the importance of this project: “The Eclipses Season which starts on July 2, and the fact that we are building the largest ground-based astronomical capacity in Chile, puts us in a privileged position. We must use this opportunity as an impulse for the development of the country. For this, we need scientists and researchers, but we also need to motivate our children.”

After cutting the ribbon, Minister Couve also pointed out that “initiatives such as this mobile astronomy laboratory are useful for science to reach children throughout our territory, to make them more enthusiastic about scientific research, and to have citizens interested in science – not just scientists. In that sense, this public-private collaboration is a great opportunity.”

The total solar eclipses of 2019 and 2020, as well as inclusive astronomy, will be the pillars of the innovative educational program developed by the LabMóvil ConCiencia Astronomy, which ultimately aims to bring astronomy to the most remote and underserved areas of Chile.

It is expected that in 2019 alone the LabMóvil ConCiencia Astronomy will reach more than 3,000 students from different regions.

For the Representative of the Giant Magellan Telescope, Miguel Roth, the LabMóvil ConCiencia Astronomy will be an opportunity to test the best practices in science education. “An example is the inclusive material ‘Universe with All Senses’, which enables access to astronomy knowledge to blind people. The success of this material has been enormous, and we want to add more experiences such as this that can be replicated at the national level.”

The launch of this unique laboratory was also attended by the President of the Council of Conicyt, Mariane Krause; the National Coordinator of the Inquiry-Based Science Education Program (ICEC) of the Ministry of Education, Edgar Hernández; and the National Science Awardees María Teresa Ruiz and Mario Hamuy.

The total eclipses of the Sun, visible from Chile in 2019 and 2020, are unique opportunities to bring astronomy closer to the inhabitants of the entire country.

The LabMóvil ConCiencia Astronomy will not only visit the north and south of Chile promoting the safe observation of the eclipses, but it will help people with visual disabilities to understand this astronomical phenomenon through the tactile book “Open Your Senses to the Eclipses: South America”, developed by NASA and the University of Edinboro (Pennsylvania), in collaboration with GMTO. The LabMóvil will also have an Arduino, a device specially developed to “hear” eclipses through a system sensitive to changes in luminosity.

The education program to be carried out by the LabMóvil ConCiencia Astronomy will also include the successful traveling backpack “Universe with All Senses”, created by the Planetarium of Medellin (Colombia) and the International Astronomical Union (IAU), to teach astronomy to blind or visually impaired (BVI) persons. One of the three original backpacks was donated to GMTO, an institution that took on the task of replicating this material in Chile at a low cost. Today there are seven traveling backpacks in Chile, produced entirely in the country, which have managed to reach more than 100,000 people in different regions.

How the LabMóvil ConCiencia Astronomy was born

This ambitious project attracted an official of the Embassy of the United States in Chile, Dr. Geoff Andersen, who has indefinitely lent his personal telescope that will travel with the laboratory.

Finally, the Embassy of the United States in Chile donated a state-of-the-art mobile planetarium to this project, making it the most modern and well-equipped astronomy education project in the country.

The partners in this adventure

The EcoScience Foundation was born from the passion for science of its founder and president, Eduardo Ergas, who could see the potential of science education in the development of Chile. Six years ago, EcoScience created the Bus ConCiencia, a mobile laboratory that promotes STEM education and inquiry-based learning in rural and underserved schools in the country. His second mobile laboratory consisted of a mobile lab for the Magallanes Region. The third and most ambitious project is the LabMóvil ConCiencia Astronomy, developed in collaboration with the Giant Magellan Telescope and The Kavli Foundation.

The Embassy of the United States in Chile supports the LabMóvil ConCiencia Astronomy through the donation of a state-of-the-art planetarium and an inflatable dome that will travel to Chile with the mobile laboratory. Children and people of all ages who have never enjoyed a planetarium can have a unique experience thanks to this collaboration.