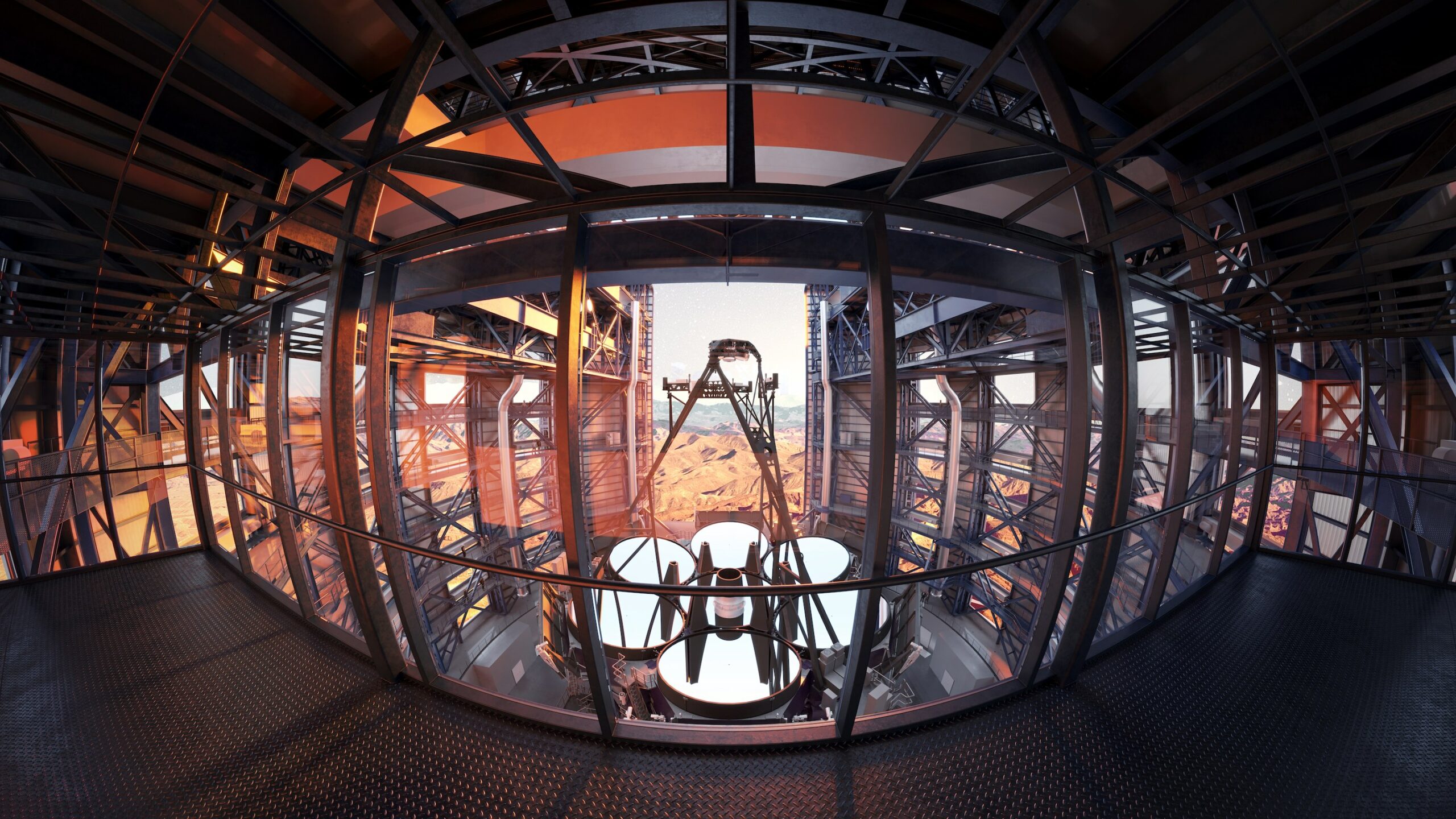 2020 was a year of progress and challenge for the Giant Magellan Telescope. Here is our 2020 story told in photos. 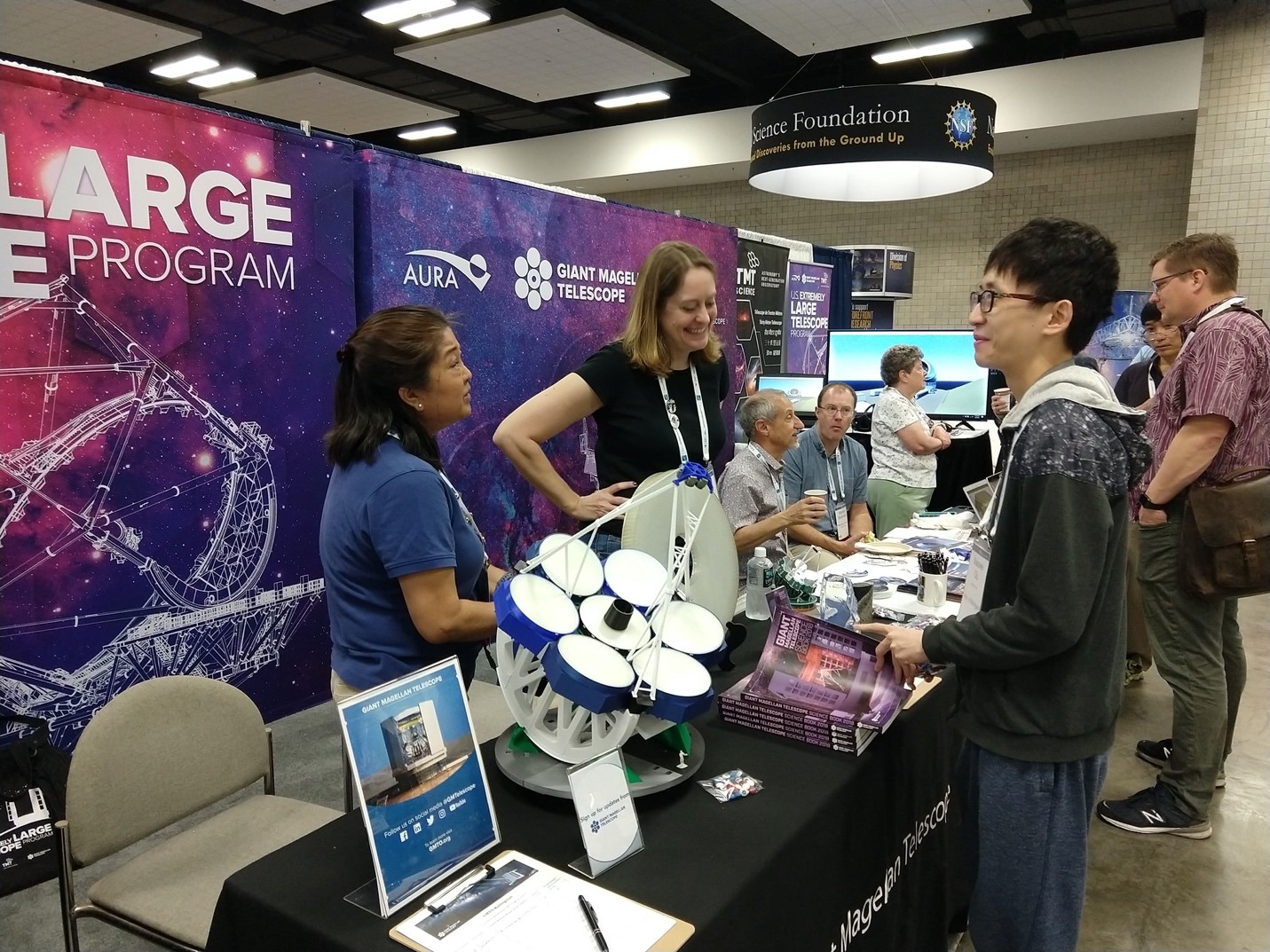 We kicked off 2020 at the 235th American Astronomical Society meeting in Hawaii as part of the US Extremely Large Telescope Program, a partnership with NOIRLab and the Thirty Meter Telescope Project. We are looking forward to participating again next year. The 237th meeting will run January 10-15, 2021, look for the US-ELTP Virtual Exhibit Booth! 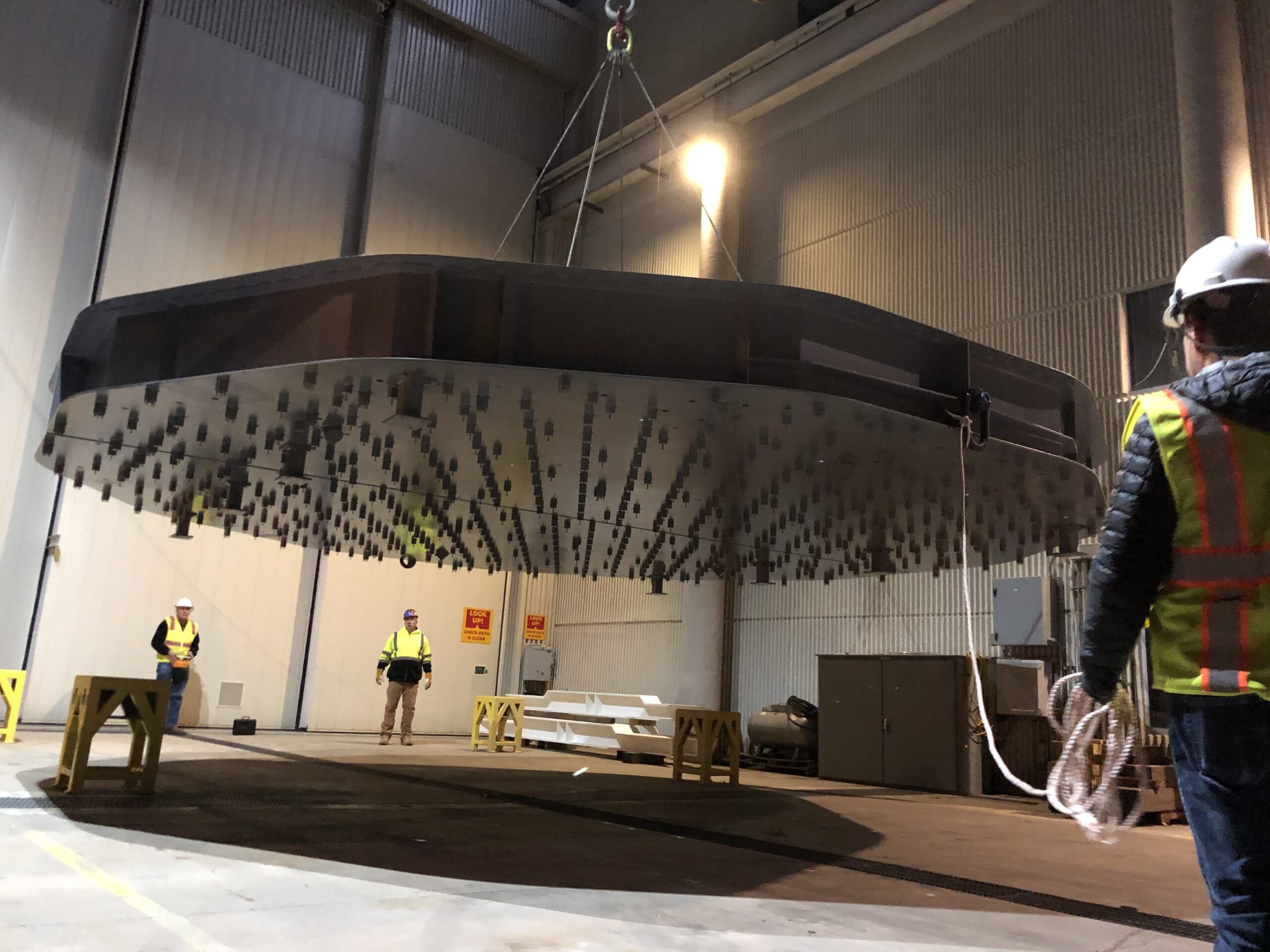 The mirror simulator was moved from CAID Industries in Tucson to the Richard F. Caris Mirror Lab at the University of Arizona at the end of February. A round piece of steel weighing approximately 14 metric tons, the mirror simulator serves to validate the mirror support system, both in hardware and software. The underside of the simulator will attach to the mechanisms that support and control the mirrors. 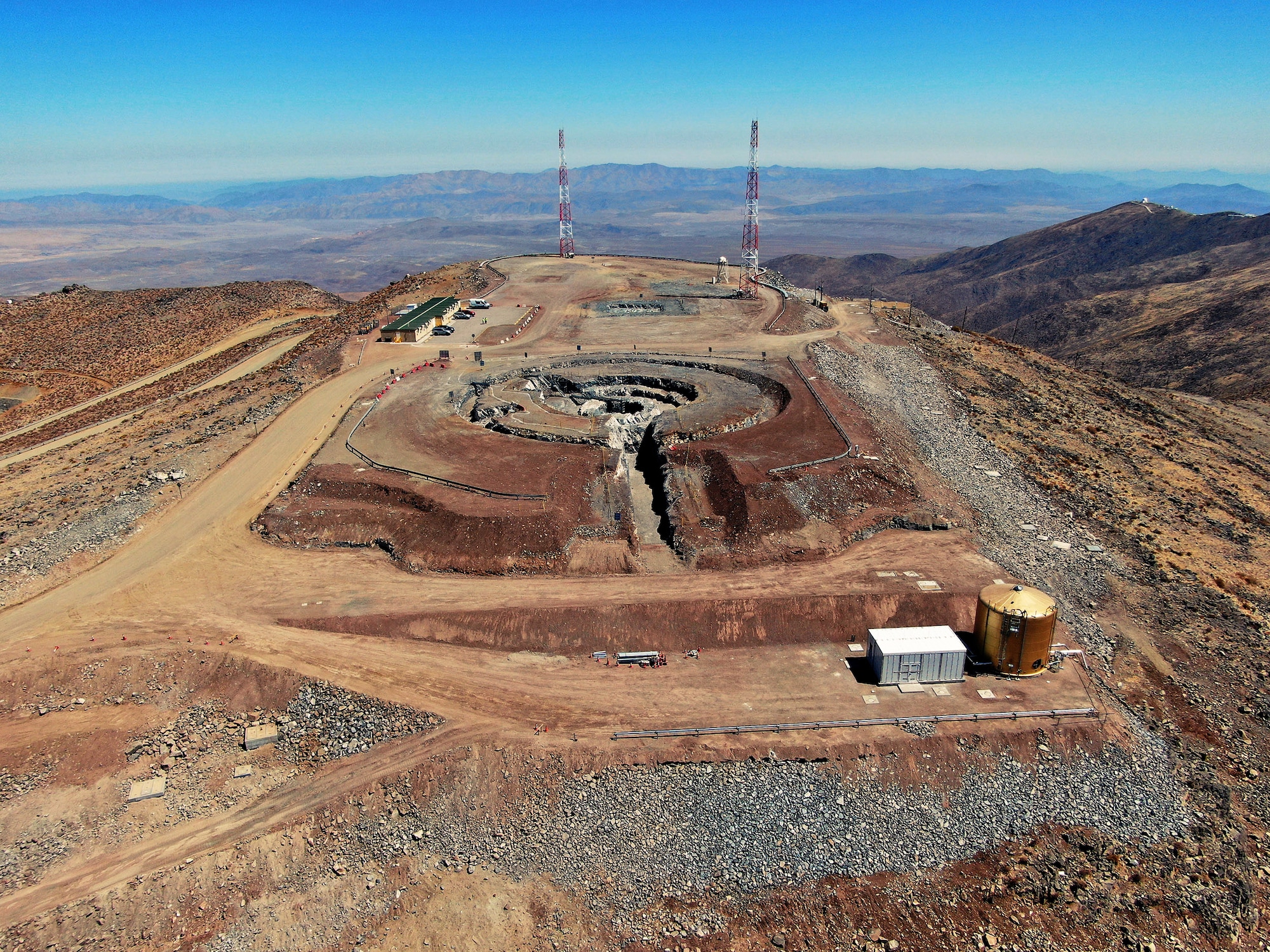 Early this year, the construction team largely completed the water and electrical distribution system upgrade at the telescope site. The site has been cleared, cleaned, and is ready for the next stage of construction – pouring the concrete foundations for the enclosure and other buildings on the site. 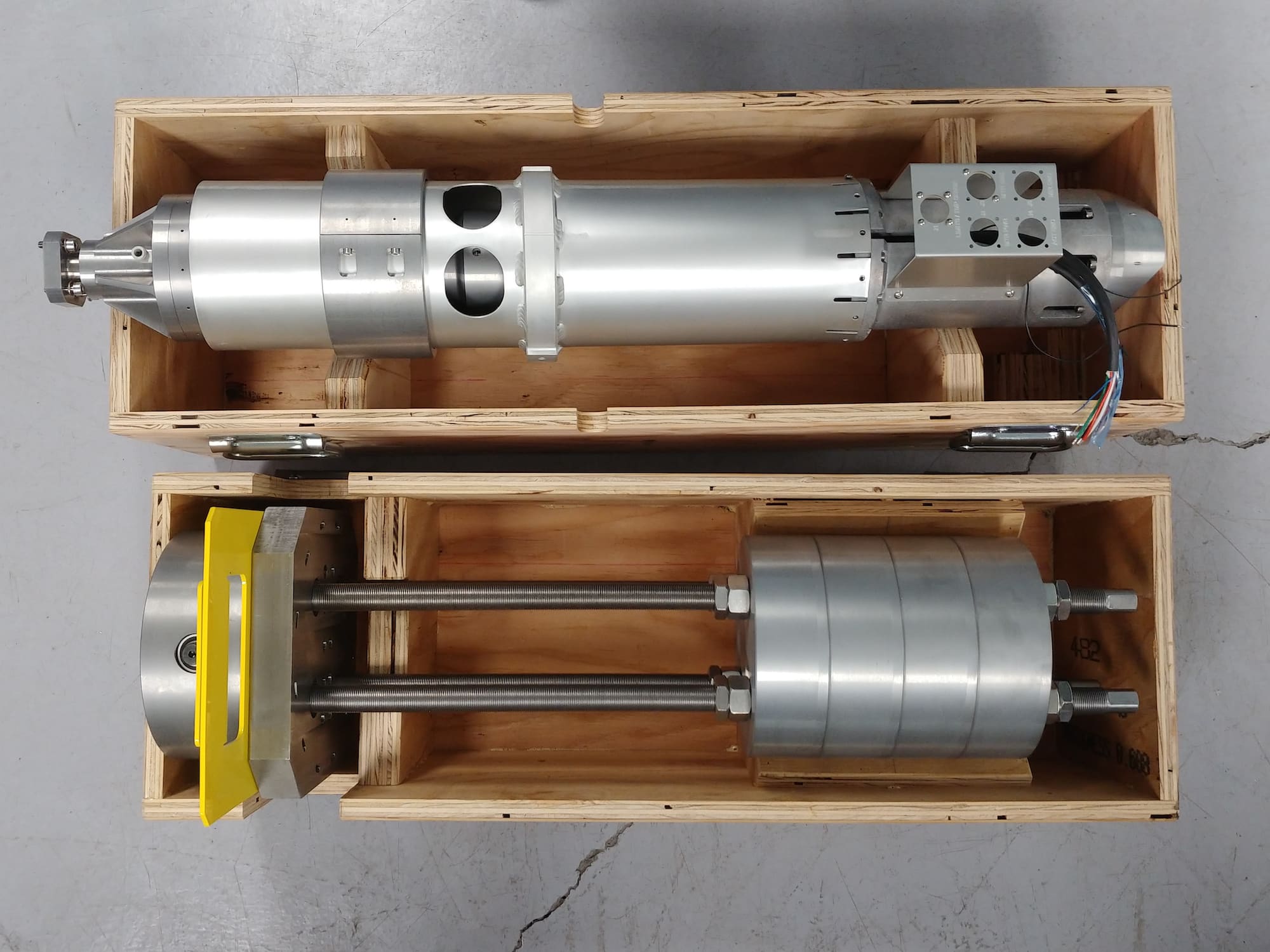 Fabrication of the Giant Magellan Telescope hardpoints (rigid struts) is underway. Each of the seven primary mirrors will utilize six hardpoints arranged in a hexapod pattern to define the mirror position. Shown here is the first hardpoint actuator assembly and counterweight gimbal assembly resting in their cradles. 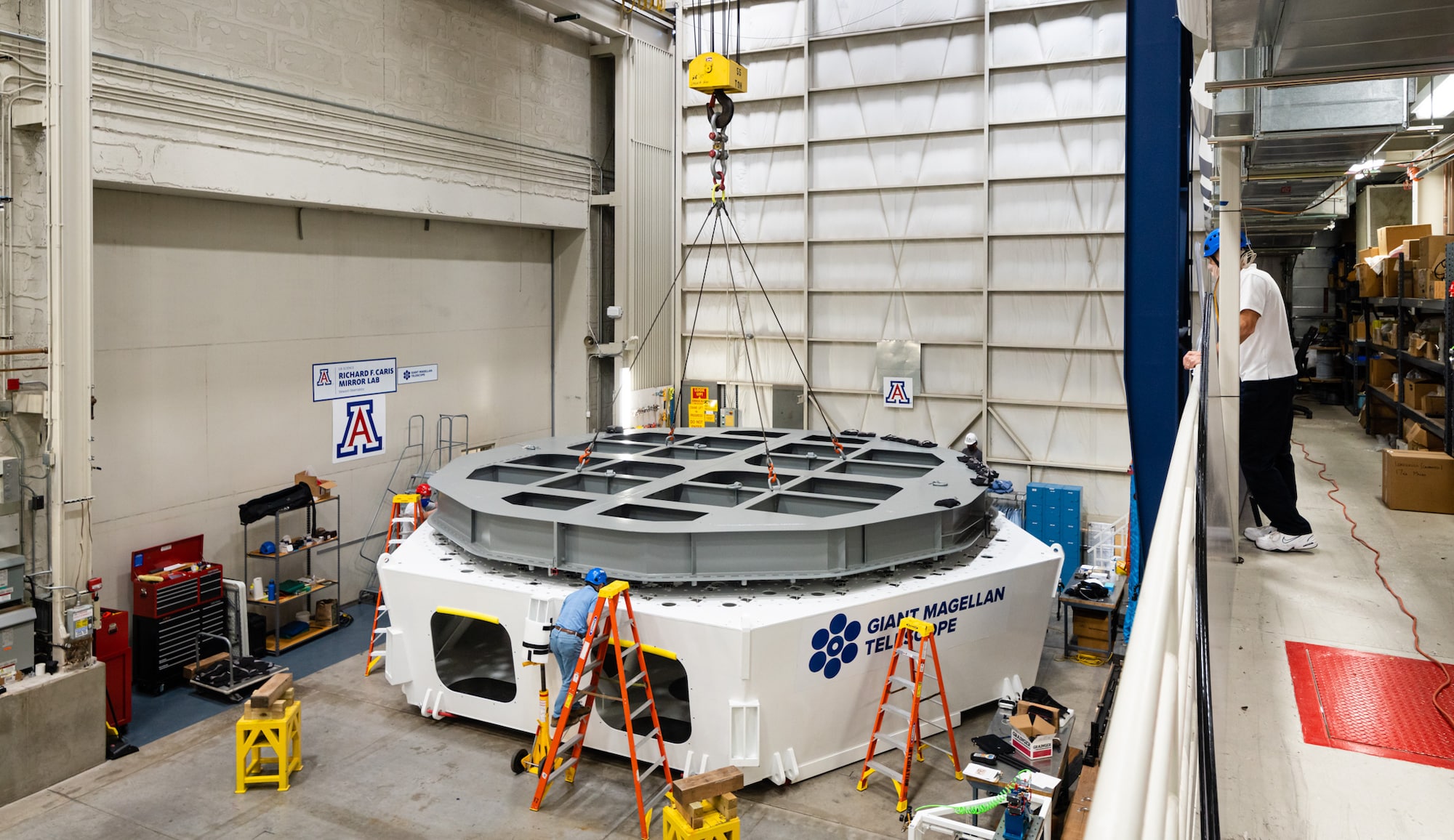 Our primary mirror controls team celebrated a significant milestone – bringing together the mirror simulator, the prototype mirror cell, and the test cell at the Richard F. Caris Mirror Lab at the University of Arizona. The mirror simulator was successfully lowered into the prototype mirror representing a crucial dress rehearsal for the process of integrating a glass mirror. 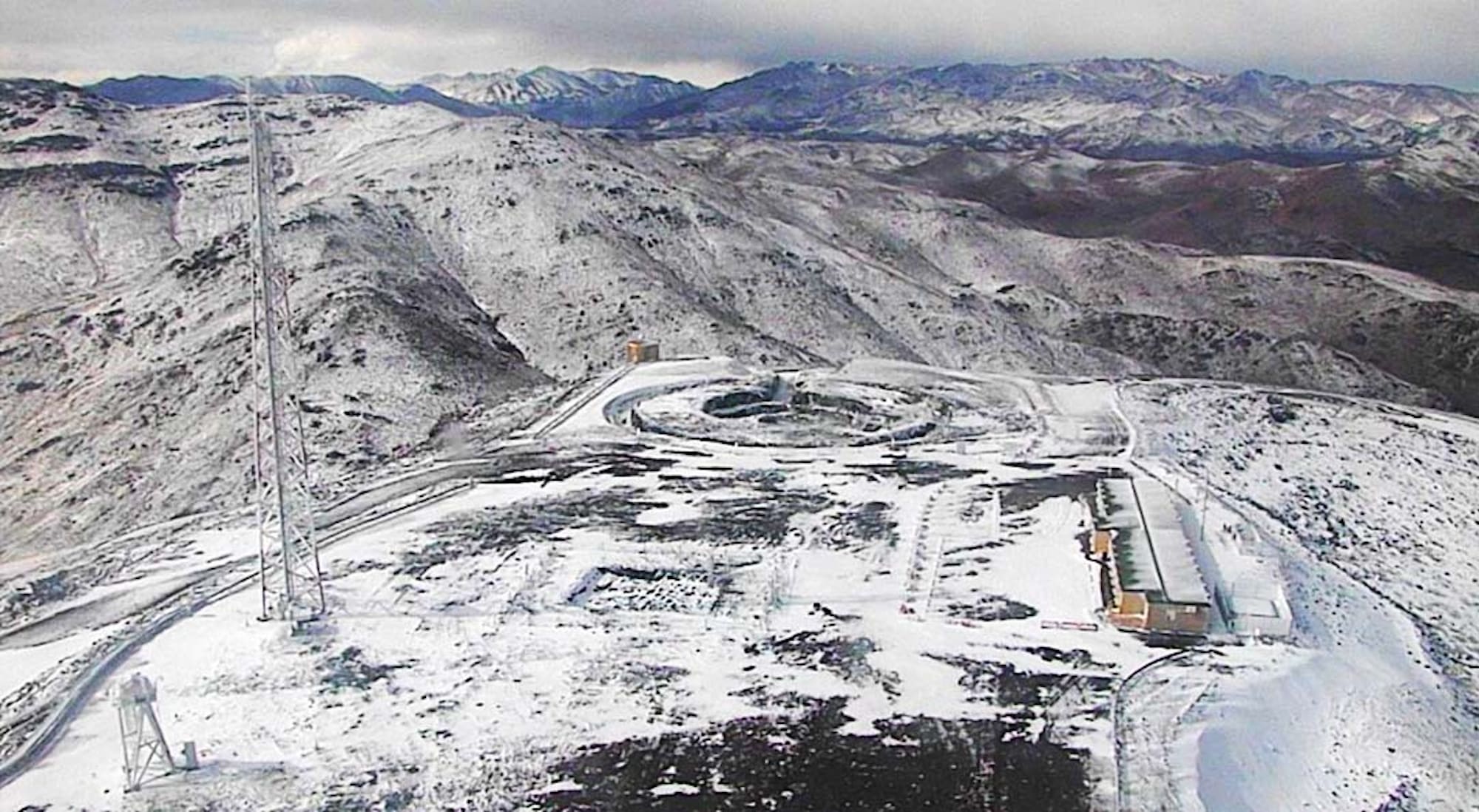 While the Giant Magellan Telescope will have spectacular conditions for more than 300 nights a year, a rare winter storm hit the Atacama Desert in Chile earlier this year. For a short period in June, our construction site was swept with snow!

The installation of static supports on our prototype mirror cell was completed. The static supports are designed to hold the mirror when it’s at rest and to catch it during an earthquake. Each of Giant Magellan Telescope’s seven mirrors will have 332 static supports affixed to its back. 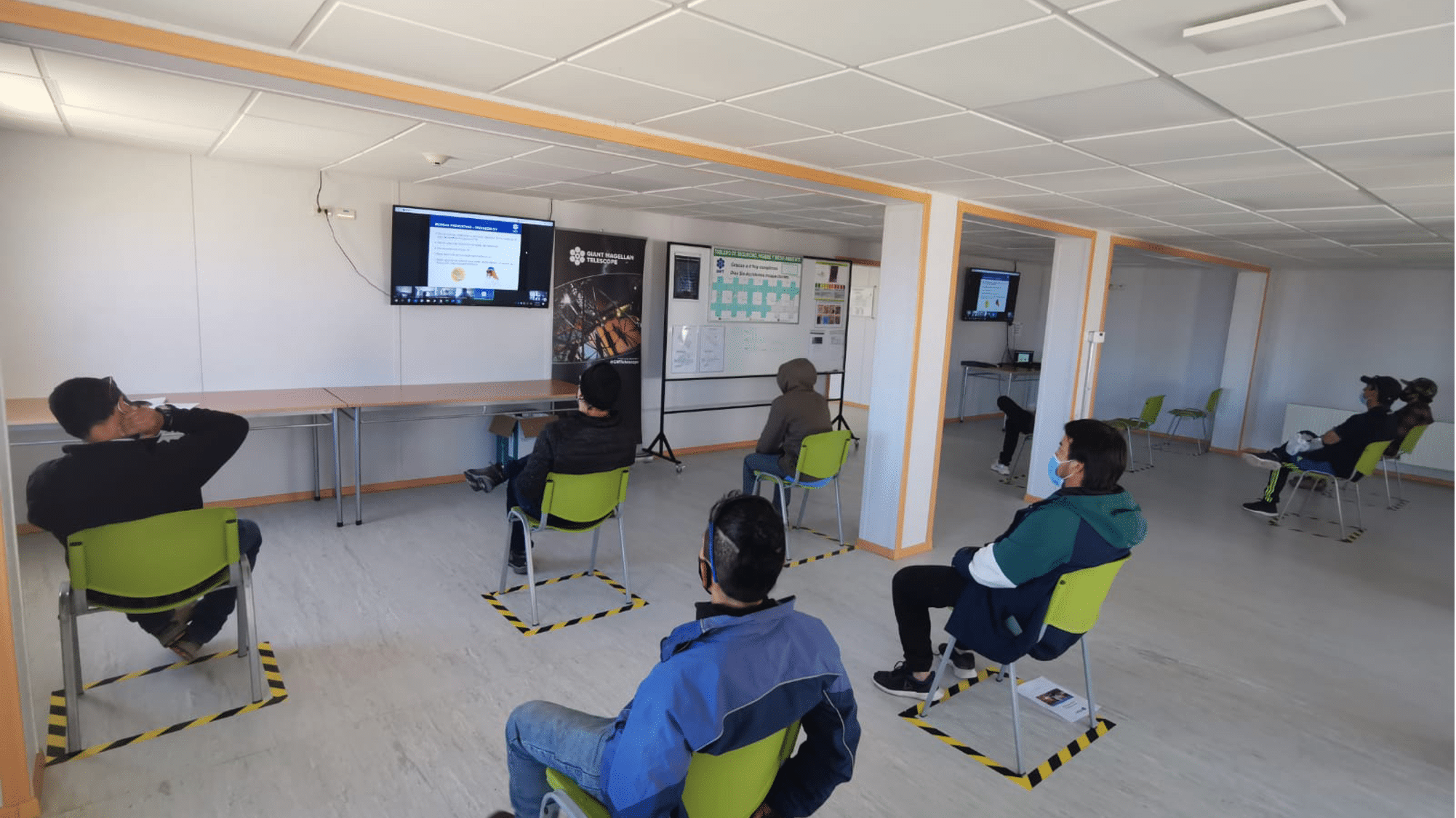 After a 33-week absence, a reduced workforce at the Giant Magellan Telescope construction site at Las Campanas Observatory in Chile receive coronavirus safety training before returning to work. Following local regulations, workers sit 6 feet apart from one another in designated seating. 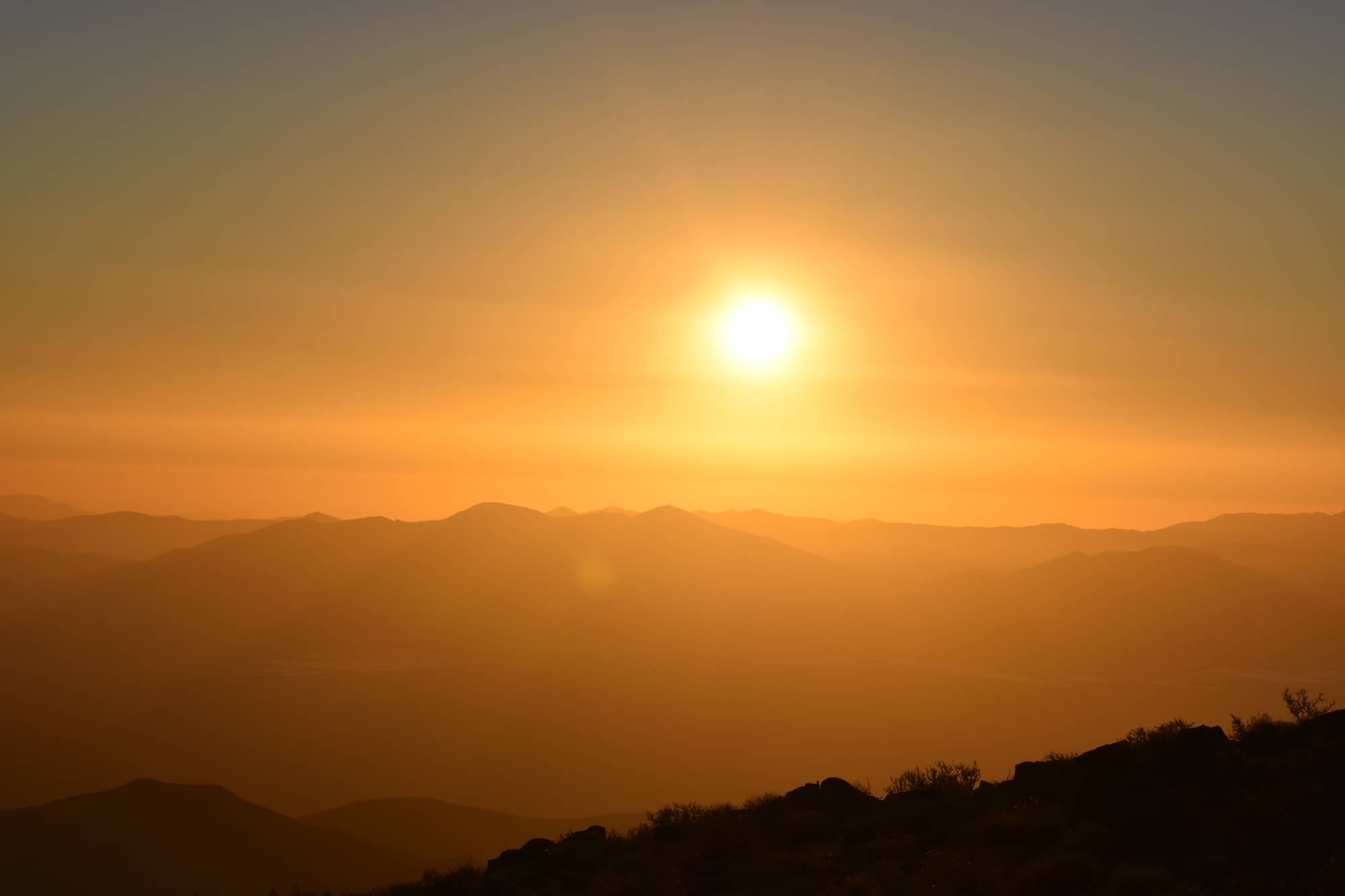 This fall, we took in the sunset from one of the highest and driest regions on earth, the Giant Magellan Telescope construction site at Las Campanas Peak. With an altitude of over 8,500 feet, the location offers key advantages in seeing and weather. 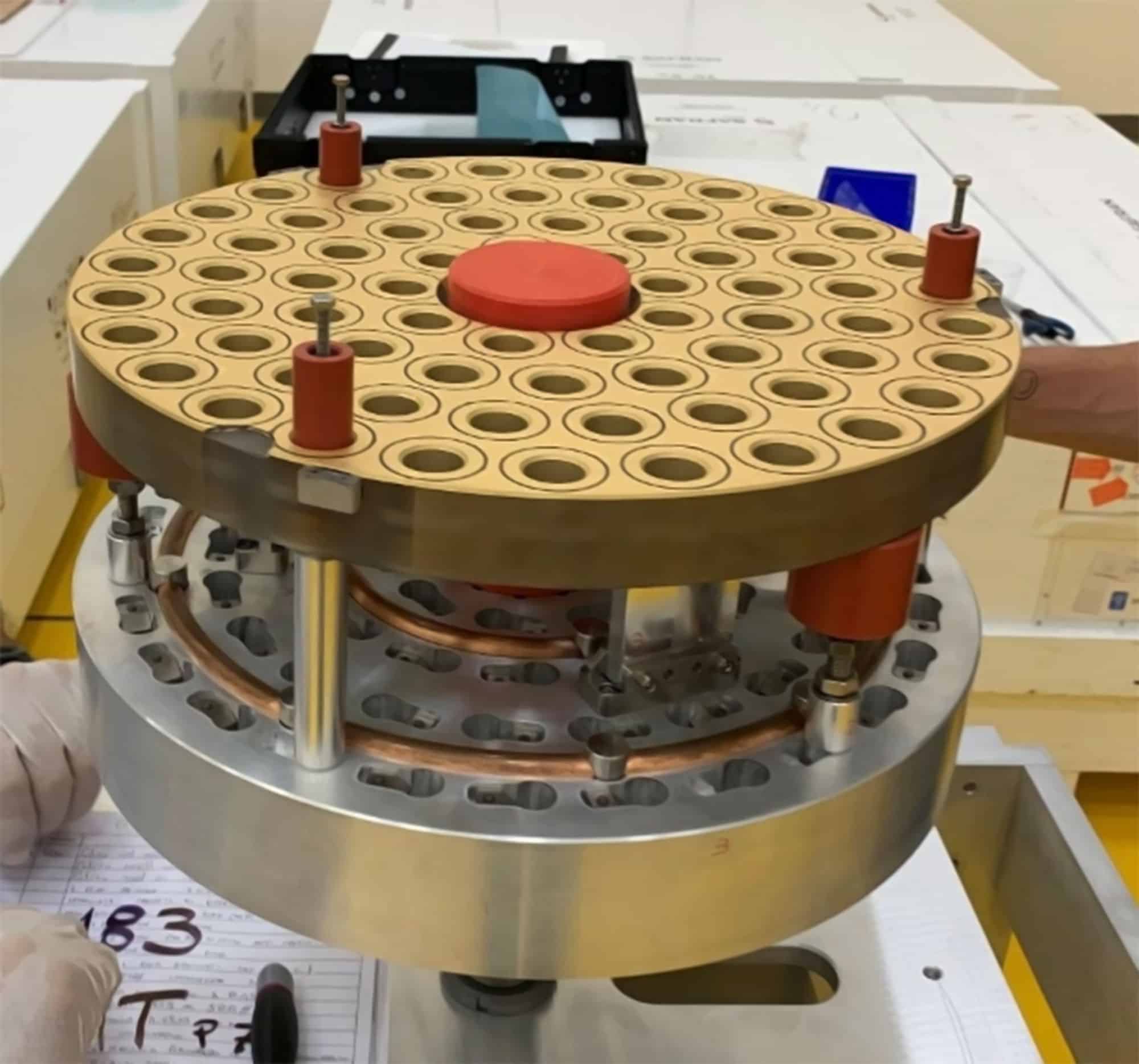 In October, progress continued on the Giant Magellan Telescope’s adaptive secondary mirrors (ASMs) in the development of a subscale prototype. The prototype is aluminum coated with 72 magnets bonded to the back surface. With the cold plate and reference body integrated, next up is optical performance testing. 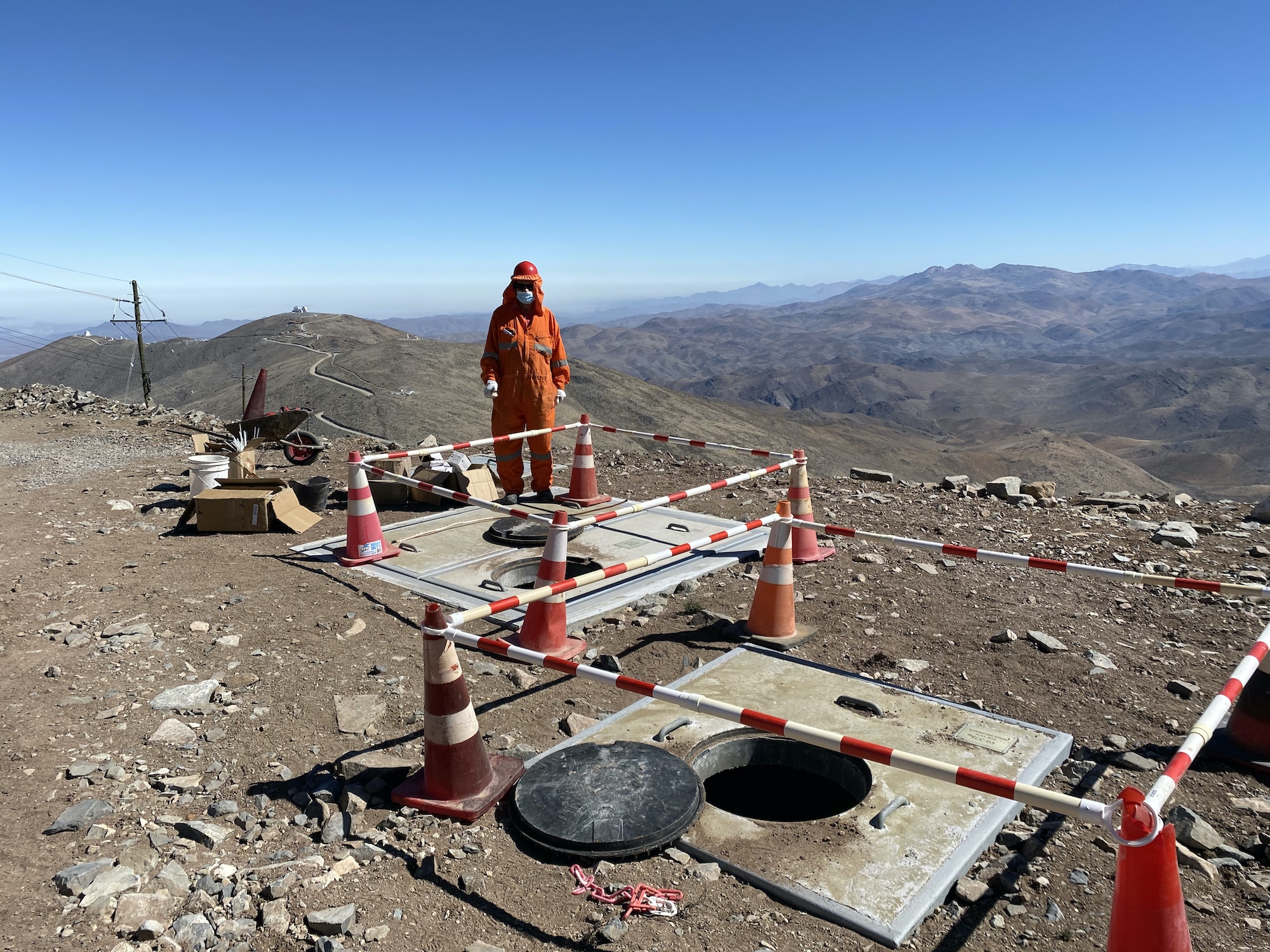 In early November, after hundreds of hours of dedicated planning and preparation for a safe return to work at the telescope site, our team remobilized with the intent to finish the Water and Utility Infrastructure distribution package. Giant Magellan Telescope construction worker wears safety gear and mask backdropped by Las Campanas Observatory in the Atacama Desert of Chile. 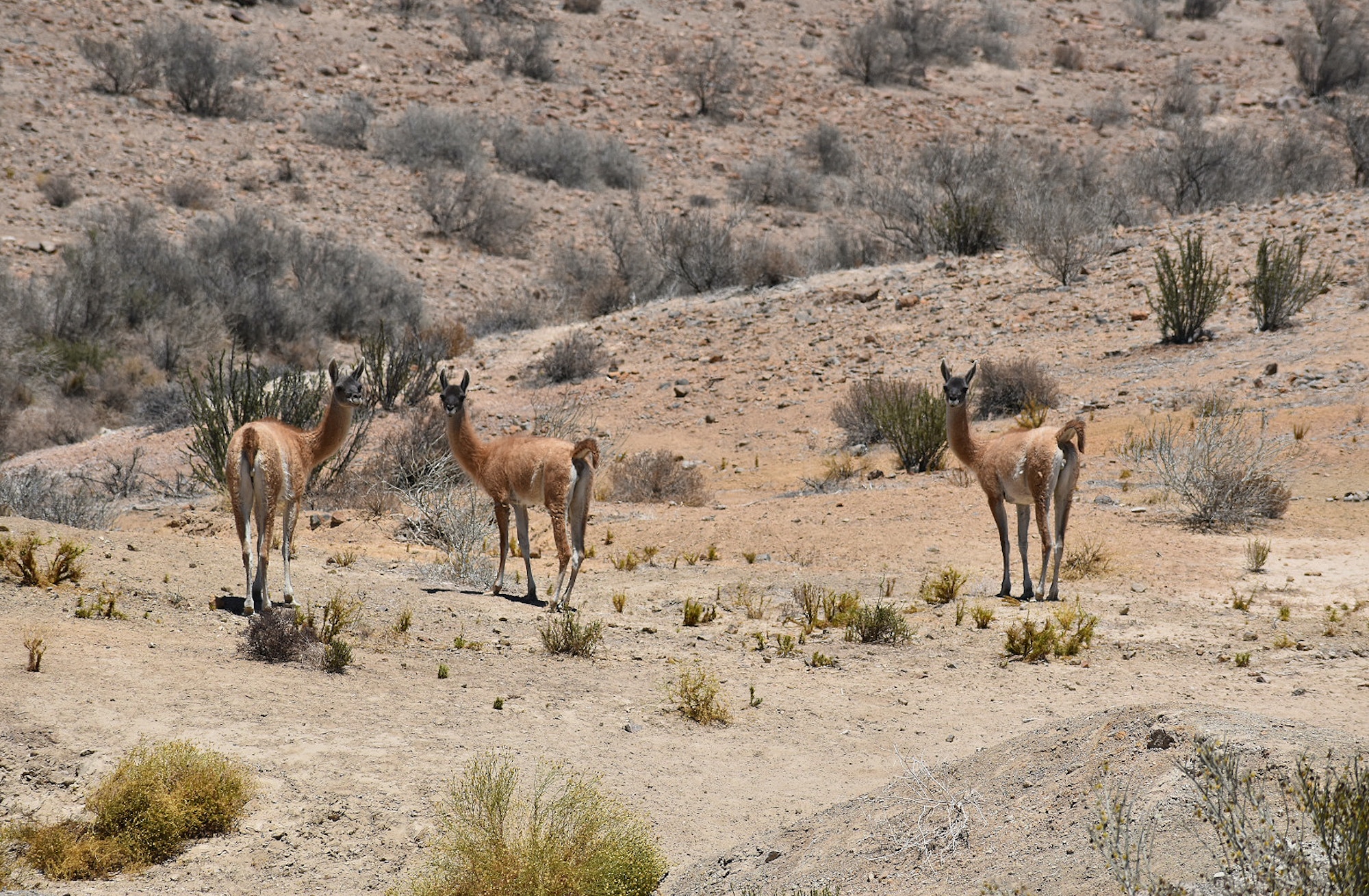 When our team arrived at the site this December, we spotted guanacos nearby. Guanacos are wild llamas, they live at high elevations, and are some of the largest wild mammals in South America. From baby viscachas to families of guanaco, the wildlife in this desert landscape is a special sight!