Funding round represents one of the largest in project history, with investments from Carnegie Institution for Science, Harvard University, São Paulo Research Foundation (FAPESP), The University of Texas at Austin, University of Arizona, University of Chicago

PASADENA, CA — August 2, 2022 — The Giant Magellan Telescope, the most powerful telescope ever engineered using the world’s largest mirrors, today announced it has secured a $205 million investment from its international consortium to accelerate construction. This investment marks one of the largest funding rounds for the telescope since its founding and includes leading commitments from the Carnegie Institution for Science, Harvard University, the São Paulo Research Foundation (FAPESP), The University of Texas at Austin, University of Arizona, and the University of Chicago. The investment will be used to manufacture the giant 12-story telescope structure at Ingersoll Machine Tools in Illinois, continue progress on the telescope’s seven primary mirrors at the University of Arizona’s Richard F. Caris Mirror Lab, and build one of the most advanced scientific spectrograph instruments in Texas.

“We are honored to receive this investment in our future,” said Dr. Robert Shelton, President of Giant Magellan Telescope. “The funding is truly a collaborative effort from our Founders. It will result in the fabrication of the world’s largest mirrors, the giant telescope mount that holds and aligns them, and a science instrument that will allow us to study the chemical evolution of stars and planets like never before.”

The funding comes after the National Academy of Sciences Astro2020 Decadal Survey evaluated the Giant Magellan Telescope as a core partner of the United States Extremely Large Telescope Program. Astro2020 ranked the program a top priority and “absolutely essential if the United States is to maintain a position as a leader in ground-based astronomy.”

“Six like-minded Founders of the Giant Magellan Telescope worked together to close the financial gap between the resources we have attracted to build the telescope and what is required to complete it,” said Dr. Eric Isaacs, President of Carnegie Institution for Science. “This investment will bring the telescope closer to first light and provide the world with transformational knowledge of our Universe. Carnegie is proud to have kickstarted the funding effort and to have worked closely with our peers.”

The Giant Magellan Telescope is under construction at Carnegie’s Las Campanas Observatory in Chile and will allow astronomers to see farther into space with more detail than any other optical telescope before. The Giant Magellan Telescope will have 10x the light collecting area and 4x the spatial resolution of James Webb Space Telescope (JWST) and will be up to 200x more powerful than existing research telescopes. 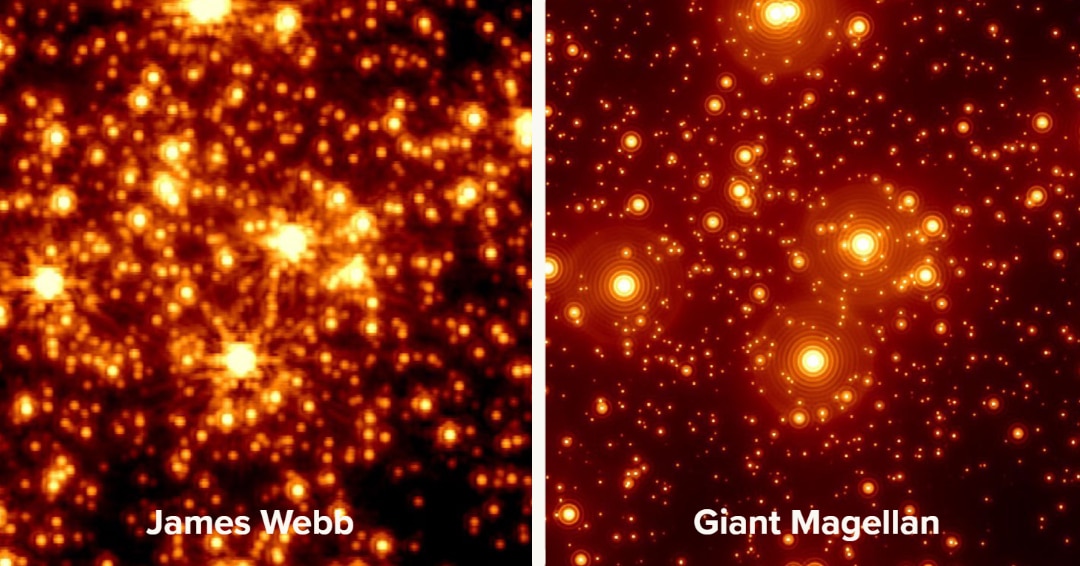 Image quality comparison of a small patch of sky as the James Webb Space Telescope would observe it (left), and a simulation of the Giant Magellan Telescope using adaptive optics to achieve diffraction limited seeing from the ground (right).

This unprecedented angular resolution, combined with revolutionary spectrographs and high contrast cameras, will work in direct synergy with JWST to empower new scientific discoveries. The Giant Magellan Telescope will be the next step in studying the physics and chemistry of the faintest light sources in space that JWST will identify. This includes searching the atmospheres of potentially habitable planets for life, studying the first galaxies that formed in the Universe, and finding clues that will unravel the mysteries of dark matter, dark energy, black holes, and the formation of the Universe itself.

“We are working with some of the brightest engineers and scientists at leading research institutions around the globe,” said Dr. Walter Massey, Board Chair of Giant Magellan Telescope and former Director of the National Science Foundation and Chairman of Bank of America. “The recent contributions from our investing partners in the Giant Magellan Telescope are collectively pushing the boundaries of astronomy, making the future a reality, and allowing us to answer some key science goals, including ‘Are we alone in the Universe.’”

The Giant Magellan Telescope has already achieved significant construction progress over the last few years. Six of seven primary mirror segments have been cast in Tucson, Arizona. The third primary mirror segment has completed its 2-year polishing phase and is undergoing final testing. Construction of a 40,000 square-foot facility in Rockford, Illinois to manufacture the telescope structure is complete. The production of the telescope’s first adaptive secondary mirror is well underway in France and Italy, and the site in Chile is primed for the next stage of construction and pouring of the foundation.

This latest $205 million investment round positions the Giant Magellan Telescope to be one of the first in a new generation of extremely large telescopes to be constructed. First light is anticipated by the end of the decade.

The Giant Magellan Telescope is the future of space exploration. Using seven of the world’s largest mirrors, the 25.4-meter telescope will produce the most detailed images ever taken of our Universe. It will uncover the cosmic mysteries of dark matter, investigate the origins of chemical elements, and verify signs of life on distant planets for the first time. The Giant Magellan Telescope is the work of the GMTO Corporation, an international consortium of leading research institutions representing five countries. The telescope is under construction in Chile and anticipated to be completed in the late 2020s. The Universe Awaits at giantmagellan.org.